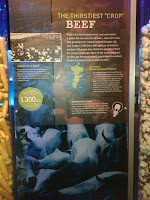 As many of you know, Stacy and I were in Chicago this past week attending a Young Farmers and Ranchers committee meeting. We went in a day early so that we could see some of the sights in town. Only one other time had we been to the Windy City, but on that first trip we visited the Chicago Field Museum. I really enjoy visiting museums and so we decided that was going to be the first stop of the day. The other reason that we liked this place is because it houses one of South Dakota’s most famous and oldest residents. Sue the T. Rex is one of the most complete dinosaurs of her type that has ever been discovered. She was found about 80 miles northeast of where we live so we always figure that she wouldn’t mind having some visitors from back home.

The museum regularly features some traveling exhibits and one of them right now is an exhibit about water. So we bought our tickets and that was our first stop. Part way through the exhibit it talks about water usage for agriculture. Some of it was worded a little strange but nothing totally out of line. But then I came across a display that was hard not to notice. The title on the display board was “The Thirstiest Crop of All…Beef”.

I stood there stunned at what I was reading. There was plenty of misinformation being touted as the truth at a very respected museum. Among the many claims were things like it takes 1800 gallons of water to produce just one pound of beef, it talks about grain feeding our cows, and that industrial beef waste easily spills and pollutes ground and surface water. Of course the answer to all of these problems is to grass feed cattle.

As I was trying to soak this all in, a family walks by with two teenage girls. One of the girls mentioned to her parents that this is why she doesn’t eat beef. Hearing something like that, I jumped at the chance to tell them the truth about beef production. Unfortunately, they walked away from me without giving me a chance to hear my story, but the next several people that stopped by know a lot more about beef production now. After talking to several visitors about why this exhibit was wrong, I decided that I needed to talk to a museum official about this issue. Come to find out, that’s harder than it should be.

Everyone that works on the floor of the museum is a volunteer. And to boot, none of them could offer me anything other than filling out a comment card. There was a phone number on their brochure that I finally called. When answered they run you through a maze of options, but none of them was one that I needed. I wanted to speak to a real person. Well, one of the options was to push 3 if you want to make a donation. I know that money talks, so I figured when that button gets pushed it gets somebody’s attention. And it did. They transferred me to guest relations where all I could do was leave a message.

I didn’t hear back from them until yesterday. I actually visited with a very nice lady who explained to me that the exhibit originates from the American Museum of Natural History in New York City. After listening to all of my concerns she seemed eager to take my case to the next level. She sent an email to her contact at the musem in New York and they are looking into it. However, she feels that it would help if they actually heard from me directly. This exhibit is scheduled to travel around North America for at least the next year. So there is still plenty of time to get this corrected. However, they are going to need to hear from more people than just me.

Follow this link to see exactly what the exhibit says about beef production.

I have no doubt that we can get this changed, but it will take a group effort as usual. I know that everyone is busy but we must always ask ourselves if we can afford not to act.

Have a great weekend.

If you wish to contact the American Museum of Natural History about this, please send an email to Charles McClean cmclean@amnh.org. He is handling this now. I was supposed to hear something from them after Labor Day and after emails and call since then, they still aren't responding to my requests to visit about this subject. Please let them know that this discussion needs to take place. Thanks.

What are your proposed corrections to the information? Also, I follow your feed on Twitter, curious about food for cattle. I've seen your argument about grass not being accessible for cattle all year round. That makes perfect sense. Is that what hay/alfalfa is usually harvested for, winter fodder? Very honest question, I don't know much about feeding cattle. If so, why would corn be a better food for them? Thanks for the info.

There are a couple things to deal with here. First is how are they calculating that it taked 600 gallons of water to produce a third of a pound of beef. My guess is that they are using some very outdated figures to dervie that number. And how far back are they going to add up those gallons, i.e. are they adding in the water it took to grow the seed corn and then the water it takes to grow the feed corn.

Next, we don't normally feed cows much grain at all. They will normally recieve some type of supplement in the winter time because of protein shortages that time of year, but rarely would they be fed a grain diet. Cows spend the majority of their life on grass raising calves.

It also suggests that all feedlots will have a manure spill and they already are polluting the environment.

Hay and alfalfa are used for winter feed normally. Most of the time, cows will winter just fine with that type of supplement.

Yearling cattle over the winter need a better diet than that though in order for proper growth. It's not a corn or hay debate, normally corn is used in a ration that also includes hay or alfalfa because it is a very energy dense feed. And, corn provides many of the nutrients that hay lacks, so it becomes pretty easy to offer these cattle a scientifically formulated and balanced diet by building a ration that includes corn and hay together. Many times the entire corn plant is fed to these growing cattle as well. It is called silage.

You must also understand that not all hay is equal. Some of it doesn't do much more than fill their bellies and still elaves their body empty of nutrition. Soemtimes during extreme weather conditions, a more energy dense feed is needed and corn works very well.

Just like with everything in life, moderation is the key. Feeding these growing cattle too much corn too fast can cause them to have some digestive problems. If this occurs it can be life threatening for the animals. This is why proper management is very important. That last thing that any of us want is a sick animal.

Corn is just one ingredient that we use to make sure that growing cattle have a balanced diet so that they can perform at their highest level.

About Advocates for Agriculture

Troy Hadrick
Faulkton, South Dakota, United States
We are fifth generation United States ranchers from north central South Dakota. Advocates for Agriculture was born from our passion for telling the positive story of agriculture. We travel the country telling our story and teaching producers how to tell their own. To learn more, visit us as www.advocatesforag.com